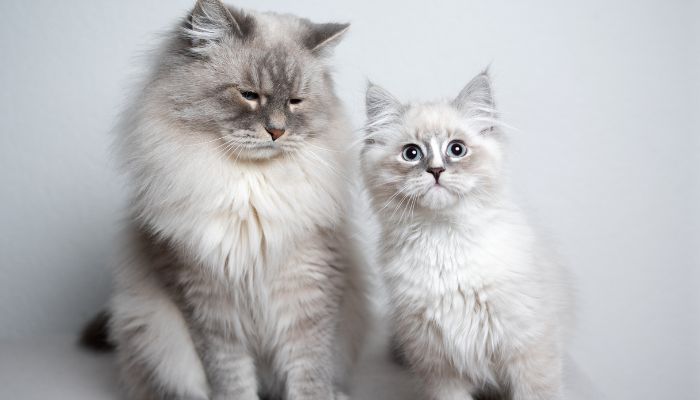 When Do Ragdoll Cats Stop Growing

Ragdoll cats are one of the largest breeds of domestic cats that you can welcome into your home– but if you have seen them as kittens, you may not realize this!

The breed does grow slowly over time and results in a long-bodied and heavy-boned adult cat.

If you are considering getting a Ragdoll cat, then it is important that you know what to expect so that there are not any surprises later on in your pet ownership journey. Take a look below to learn more about Ragdoll cats and how they mature and grow.

The Ragdoll cat is a very popular cat breed that is known for having an almost dog-like, affectionate and calm personality.

They are easily identified by their beautiful blue eyes–which are almond-shaped–and a colorpoint coat (like the seal point ragdoll) that can come in a variety of 6 different colors.

The other two patterns that you may see on a Ragdoll cat are mitted or bicolor.

These cats are also long-bodied and heavy-boned with a long-haired coat. A particular trait of the Ragdoll–in fact, this is the trait they were named for–is that they will flop and become limp in their owner’s arms when picked up.

History of the Ragdoll Cat

The history of the Ragdoll cat started in Riverside, California. This is where the breeder Ann Baker began to develop and breed the cat in the 1960s. Baker worked carefully to select gentle and non aggressive traits to pass down to the offspring.

The breed was then recognized as an official purebred cat breed in 1965. The breed only grew in popularity after that, and is still a very popular breed of cat today.

In both 2019 and 2020, the Cat Fanciers’ Association actually named the Ragdoll cat as the most popular cat breed of these years.

How Big Does a Ragdoll Cat Get?

As mentioned above, the Ragdoll breed is one of the largest breeds of domestic cat. This means, of course, that they can grow to be very large!

The amount of hair that a Ragdoll cat has also serves to make them appear bigger or heavier than they actually are, as this is a breed with a fluffy coat. The Ragdoll typically measures in at 9 to 11 inches tall, and then at 17 to 21 inches in length. This is excluding their long, fluffy tail, and is a body measurement only.

For weight, a Ragdoll cat will generally weigh between 10 to 20 pounds. As this is only an average, height and weight can still be outside of these parameters, depending upon things such as the genetics, diet, and exercise of the individual cat in question.

This is a breed where the male is usually bigger and heavier than the female cat.

When Does a Ragdoll Cat Stop Growing?

Not all cats grow at or mature at the same rate. Most breeds of cat are fully grown by the time that they are 1 year old. However, the Ragdoll cat is not one of these breeds.

The Ragdoll cat takes more time to mature than many other cats. The average amount of time it takes for a Ragdoll cat to grow to full size or mature is 3 to 4 years. This is from kittenhood.

So, by the time a Ragdoll cat is 3 or 4 years of age, they should be fully grown and should not be getting any larger than they currently are.

When a Ragdoll cat is maturing, they grow in small spurts over time. As kittens, they typically grow pretty quickly and then it begins to slow.

First things first, what is a ragdoll cat? This is a beautiful breed of cat that is known for its blue eyes and a lovely distinct colorpoint coat. It has a pleasing temperament and is very sweet and gentle. They are also affectionate and love to be around their owners and family—which is not always the case with cats!

Ragdolls usually get along well with other pets and children, though they do prefer the company of their people rather than the other household pets. The breed is known to be highly intelligent and playful, too. They can even be taught certain tricks with the right amount of patience.

Ragdoll cats can learn tricks like roll over, and have also been known to play fetch! The name ragdoll comes from a trait that was bred into the cats—they will flop, like a ragdoll, when they are picked up by their owners and will stay like that in their arms. This is a trait that the cats remember from kittenhood when their mothers would pick them up.

How large do Ragdoll cats get?

Ragdoll cats are one of the largest breeds of domestic cats, only after the Maine Coon breed. The Ragdoll cat typically grows to be between 9 to 11 inches tall, and between 17 to 21 inches long, not counting its long and fluffy tail.

They are heavy-boned and long-bodied cats.

For weight, the Ragdoll cat usually weighs in between 12 to 20 pounds.

At what age is my Ragdoll fully grown?

They grow in spurts until they reach this full size and full maturation.

How big is a 1-year-old Ragdoll?

When it comes to growth and maturation in cats, this happens at different rates, depending upon the breed of cat. Most cats do reach their full size and maturation by the age of 1 year old. However, this is not the case for the Ragdoll breed of cat.

Ragdolls usually take 3 to 4 years to fully mature, growing in spurts over this period of time.

So, how big is a Ragdoll at 1 year of age? They can vary anywhere between 9 to 18 pounds at this age, depending upon their diet, exercise, genetics, and other related factors.

Do Ragdolls get fluffier with age?

Ragdoll cats are known for being fluffy, long-haired cats. However, when they are young, their coats are not as long and fluffy. In fact, when this breed is young, it is born all white and its coloration and coat pattern develop later–similar to a Dalmatian!

Ragdoll cats take time to grow into their signature fluffy coat, and it will not get truly long and fluffy until it is 3 or 4 years of age– so yes, they do get fluffier with age! They are also going to be at their fluffiest when it is winter or during the cold months.