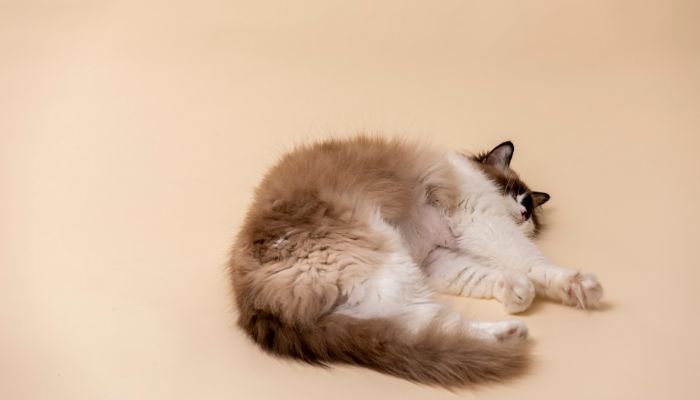 What is the most popular Ragdoll Colour?

I love my ragdolls.  I never used to be a really big cat guy but I have two seal point (well maybe mitted) ragdolls and They’re the best.

The most popular ragdoll colour is the seal point.  It gets the most searches on google, and also was the original colour of the first ragdoll.  The blue (steel grey) is also a very popular colour and is in second place.  The lilac (pinkish grey) comes in third.

The Many Colors and Patterns of a Ragdoll Cat

Ragdoll cats. Who doesn’t like them? Well-behaved, affectionate, and overall good with children and other
pets. Fluffy and striking. Known for melting even the hearts of those indifferent to cats.

For those of you not familiar with the breed, Ragdolls are fairly new, originated in the 1960s by a cat
breeder named Ann Baker. If you pick one up, they tend to go limp in your arms, which gave them the
name. They are easy to pet and very friendly toward humans.

There is a lot of speculation on the breeds used to create the Ragdoll, and although nothing has been
confirmed, this particular cat is commonly associated with Birman and Himalayan. Sometimes,
depending on the colouring, it’s even associated with the Siamese cat, but the Ragdolls are certainly
different.

They tend to be on the big side, have short legs and have a flat-topped head.
They are all born with white snowy fur and blue eyes, however, this changes as the cat grows older.
Interestingly, Ragdoll cats mature slowly, therefore, you have to wait for a solid two to three years to
finally, see how your cat will turn out.

As some of you may already know, all Ragdoll Cats have point coloration, which means, they all have a
darker shade of colour in their extremities in comparison to the pale rest of their bodies. These
extremities include ears, tails, faces, and feet. Just predicting the final pattern of your Ragdoll is part of
the fun of owning one, so let’s go ahead and help you out a little bit in recognizing which type of Ragdoll
cat you have or might have.

Many people have asked if Cowboy Magic is ok for cats…and I am happy to say that it is. You just need to make sure that you rinse thoroughly because your cat will lick the spot that gets wet. Here is some further information about it.

Now Ragdoll cats seem to be just overall wonderful, right? Not only are they the ideal mild-mannered
cat, but they are also beautiful and may come in wonderful combinations. All these traits make these
cats perfect for shows and as the breed becomes more popular, the shows become more common.
But beware. If you are only considering getting a Ragdoll cat because of what is commonly known about
them, you may think twice. As it happens with everything in life, it’s not all black and white and all these
characteristics may vary. You can actually encounter a Ragdoll that is not friendly or that doesn’t like to
be held, as it’s common for many cats.

You could also find cats that are almost definitely a Ragdoll but maybe their pattern or colour doesn’t fit
any of the descriptions. Let’s just keep in mind as animal lovers their differences is what makes them
unique and that they should just be accepted for what they are.

If you are interested in knowing the more about the seal point ragdoll I have two of them and we have a page about them.