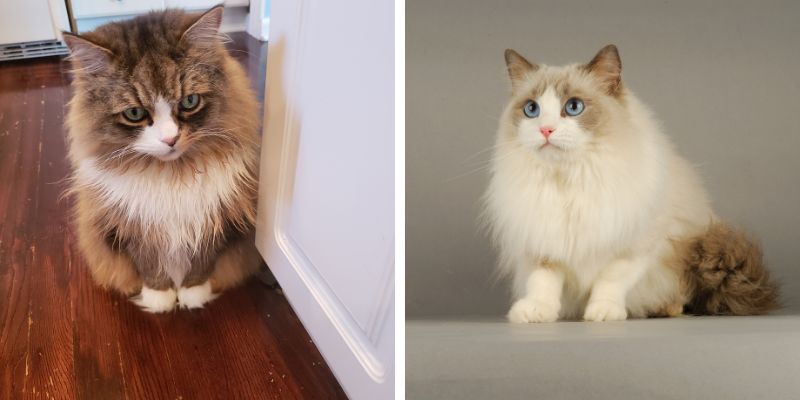 If you are a cat lover, you have surely heard of the sweet, affectionate Ragdoll cat. However, you may not have heard of the Ragamuffin, as it is slightly less popular or well-known right now.

Both breeds are actually closely related and originated from the same original cat– a cat by the name of Josephine.

Though they are closely related, the Ragdoll and the Ragamuffin do still have some differences that help to distinguish them and set them apart from one another. Read on to learn more about both the Ragdoll and Ragamuffin breeds of cats.

Firstly, a Ragdoll cat is a breed that is known to be sweet, affectionate, and playful. This is part of why the breed is so popular. They are large cats that come in different coat colorations and have long hair.

For eye color, the Ragdoll has blue eyes that are almond-shaped. This cat is also known for a special trait–they go completely limp and relax when they are picked up.

This is something that cats do when they are kittens, but Ragdolls never grow out of the trait as adult cats. The Ragdoll was first bred in the 1960s by a breeder named Ann Baker.

What is a Ragamuffin Cat?

The other breed of cat that we are discussing is the Ragamuffin cat. It is a breed that descends from one Ragdoll parent and one parent is another longhaired cat like a Persian or Turkish Angora.

First, they were called Liebling, which is German for darling, but then their name was changed to Ragamuffin to reflect their Ragdoll heritage. It was not until 1994 that the Ragamuffin was recognized as its own breed of cat, and it gained full recognition by the Cat Fanciers Association in 2011.

The Ragdoll and Ragamuffin cats are actually the largest domestic cats, besides the Maine Coon cat, of course. One breed is not bigger than the other.

They both usually weigh in between 8 and 20 pounds. It typically takes them 3 to 4 years to reach full size from when they are kittens– both breeds are slow to mature.

Ragdolls and Ragamuffins are both great family pets, because they have gentle and affectionate dispositions.

They are both better suited to being indoor cats than outdoor cats, which is something to take into consideration when choosing a pet! They have some of the characteristics of a dog, as they are more affectionate with their owners than some other breeds of cat may be.

The Ragdoll also has a charming tendency to go limp in its owner’s arms– hence the name of the breed. However, while Ragamuffins may sometimes do this, too, it is not a common hallmark of the breed like it is for the Ragdoll.

The biggest differences between the two breeds actually come into play when it comes to their appearance.

Ragdolls, for instance, can only have blue eyes. Their eyes are also almond-shaped. Ragamuffins, though, have rounder and more walnut-shaped eyes, and they can come in other colors besides blue.

When it comes to their coat, Ragdolls come in 6 colors. These colors are lilac, seal, blue, chocolate, cream, and flame. They then can also come in 3 different patterns, these being colorpoint, mitted, and bicolor.

Lynx and tortie variations can be seen, too. Ragamuffins can come in much more variety of coat color. Some of these include cinnamon, platinum, and fawn.

Their coat patterns usually echo that of the Ragdoll but are not limited to those 3 patterns either. They can also come in patterns such as tuxedo or smoke.

What is the difference between a Ragdoll and a Ragamuffin?

Ragdolls and Ragamuffins are both types of cat and are actually very similar. However, they are not the same kind of cat.

The main difference between a Ragdoll cat and a Ragamuffin cat is the animal’s coloration. Ragdolls have blue eyes, while Ragamuffins can have more of a higher variety of eye colors.

Ragdolls come in 6 different coat colorations, while the Ragamuffin can have much more variation in coat color and pattern.

What 2 breeds make a ragamuffin cat?

The Ragamuffin cat is a breed that was crossed between two different breeds of cat to get the breeders’ desired results.

How do I know if my cat is a Ragamuffin?

There are some features that a Ragamuffin cat possesses that can help you to identify whether or not your cat is a Ragamuffin. Ragamuffins are large cats with a long body and can be said to be heavily boned.

Ragamuffins also have long tails and plush, long coats that help them to appear even larger than they actually are. This can be common with long haired cats.

They have medium-sized heads and their eyes are rounded and walnut shaped, rather than almond-shaped like some other breeds of cat. They can appear in many coat patterns and colors as well.

Many know that Ragdoll cats have the tendency to fully relax and go limp in an owner’s arms or lap. This is because this breed has remembered this reflex from when they were kittens and being carried around by their mother.

It is an endearing and quirky trait! As Ragamuffins are bred from Ragdolls, you may wonder if this is a trait that has been passed down from their Ragdoll parent.

Luckily, Ragamuffin cats do sometimes have the tendency to stretch out and go limp or flop in their owners’ arms as well, just like the Ragdoll breed!