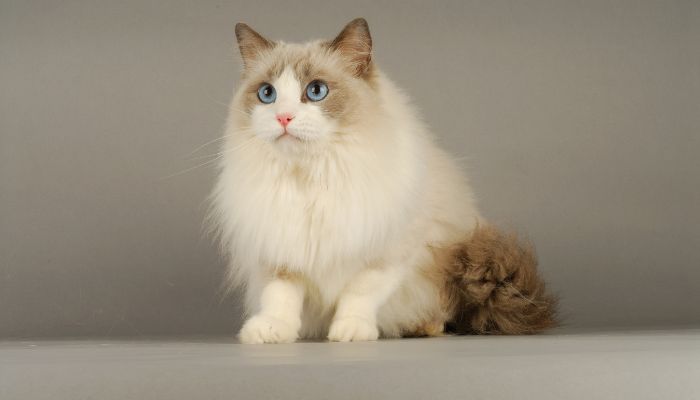 How Long Do Ragdoll Cats Live?

There are a few different factors that come into play when looking at the amount of time that a cat will live. These include such things as diet, overall health, and exercise habits.

If you are considering adding a cat–like the Ragdoll, for instance–to your family unit, then you will want to be sure that you are aware of the average lifespan for the breed.

After all, a pet is a lifetime commitment, so you want to be sure that you are aware of what you are signing on for. Read on to learn more about the Ragdoll cat, as well as the projected lifespan for this loveable breed.

First things first, what is a Ragdoll cat, anyway? The Ragdoll is a long-haired cat breed that is easily recognizable by its almond-shaped eyes in a brilliant shade of blue. The cat also has a fluffy coat that comes in 6 different color options, and 3 patterns–colorpoint, bicolor, and mitted.

The breed is named for its tendency to go limp or flop when picked up–like a ragdoll. Ragdoll cats are known for their sweet, calm temperament and affectionate nature. They are also very intelligent and can even be taught certain tricks!

The offspring then had certain endearing traits that Ann Baker selectively bred to create the Ragdoll breed as we know it, more or less, today! Then, in 1965, the Ragdoll breed was recognized as an official purebred breed of cat.

After the breed was recognized, a breeding couple known as the Daytons continued to breed and refine Ragdolls from a breeding pair they bought from Ann Baker.

These days, our domestic cats are living longer than they used to. One of the things to note is that, if you allow your cat free range outside and classify your pet as an outdoor cat, it will likely not live as long as its indoor counterparts, unfortunately.

This is because there are more dangers and threats to a domestic animals lurking outside. Some of the threats can include wild animals like coyotes or vehicles and roads that could cause an accident.

Of course, another thing that can affect the lifespan of a cat is if it has any serious health issues or conditions, or if they have any common health issues that affect its breed and may pop up later in life.

On average, a cat typically lives to around 13 years of age. This can fluctuate and be either shorter or longer, due to veteran variables. Very many cats these days live to be much older than 13, after all! For instance, the oldest cat on record as of right now was 38 years old.

When it comes to a Ragdoll cat, this breed can have a broad range of years in life expectancy. The average lifespan of a Ragdoll cat can vary anywhere from 12 to 23 years of age. Typically, though, a Ragdoll will live to be somewhere in the middle of this wide estimate, at around 14 to 16 years old.

The life expectancy of this breed is slightly higher than the average for the average domestic cat, in part because this is a fairly healthy breed with few health issues or concerns, and also an indoor cat.

There are some different health issues that the ragdoll cat is susceptible to, though, overall, they are a fairly healthy breed of cat. Not all of these are deadly, but they will require a financial commitment as your cat receives treatment. Read on to learn more about the three most common issues for ragdoll cats.

Ragdoll cats are one of the breeds that are prone to obesity. This is something that you will want to deal with because obesity can lead to other issues down the road if not treated—besides causing your cat discomfort.

Some of the issues that can be caused by obesity include diabetes and heart disease. Ragdoll cats are already prone to a heart disease called hypertrophic cardiomyopathy, which we will go over in further detail below. Obesity can be solved by putting your cat on a special diet, which your vet can recommend.

Ragdoll cats are also prone to different urinary tract issues, such as bladder stones. While these are not deadly, they can be incredibly uncomfortable for your pet. Cystitis is another urinary tract issue that your cat may develop. This is an inflammation of the bladder that is typically caused by a bladder infection.

Ragdoll cats may develop infections or inflammation in all parts of the urinary tract, including the bladder, the kidneys, the ureters, and the urethra. Symptoms of these sorts of issues include increased urination or accidents, and require a trip to the vet. They can typically be treated with antibiotics but can be harmful if left untreated.

Hypertrophic cardiomyopathy is a heart condition that many ragdoll cats can develop. This occurs when the wall of the heart thickens abnormally. It can then cause lots of problems for the cat suffering from this and can prevent normal heart function.

This prevention of heart function does not happen right away, though—this usually happens over time after the wall of the heart has started to thicken. It can ultimately cause heart failure. Luckily, this heart condition can be treated with lifetime medication, as long as it is identified.

Indoor cats do live longer than outdoor cats, as they are not exposed to as many dangers, such as wild animals or vehicles and roads.

A Ragdoll cat is one such breed that is not well suited to being an outdoor cat. If you keep your Ragdoll cat inside, they will live longer– the lifespan here can vary. The lifespan of this breed can be anywhere from 12 to 23 years of age.

Do Ragdoll cats have health issues?

Luckily, the Ragdoll cat is a fairly healthy breed! That being said, every breed of cat does have certain issues that can crop up. The Ragdoll does have a few different known health issues, which you should be aware of, especially if you are considering welcoming this breed of cat into your home.

These health issues include obesity, so it is important to watch your Ragdoll cat’s food and treat intake.

Ragdoll cats can also suffer from urinary tract issues such as bladder stones, and can suffer from hypertrophic cardiomyopathy, which is a type of heart disease.

What illnesses are Ragdoll cats prone to?

When considering a breed of pet to add to your family unit, you should do some research to be aware of any health issues or illnesses your pet may contract in the future, so that you can be prepared if anything happens.

Ragdoll cats are a healthy breed, but they do still have some illnesses or conditions that they may end up with.

These include obesity, as well as

Hairballs, because of their long coat, are also common in Ragdoll cats.

Ragdoll cats are known for being placid, sweet, and affectionate. They are also known for their quirky tendency to go limp–like a ragdoll!–when picked up. But, in addition to all of this, Ragdoll cats are a highly intelligent breed, too. In fact, the Ragdoll cat is a breed of cat that can be taught certain tricks if you are patient with them. Some of the tricks that a Ragdoll can learn include “roll over” and “fetch”. Fetch is especially well suited for the playful and almost puppy like nature of this breed of cat.

Do Ragdoll cats have health issues?

Ragdoll cats are usually fairly healthy cats, so, luckily, this breed does not have a lot of health issues that they deal with. One of the health issues that is common with ragdoll cats, though, is obesity. They can also be susceptible to urinary tract issues and a form of heart disease known as hypertrophic cardiomyopathy.

What illnesses are Ragdoll cats prone to?

When you are adopting a pet, it is important that you know about the health issues that the breed may suffer from. After all, a pet is a lifetime commitment, so you should know what challenges may come with age for your potential pet—so that you can decide whether it is something you would be able to take on. Ragdoll cats are a pretty healthy breed, but they are still known to have urinary tract issues like bladder stones, as well as a heart disease called hypertrophic cardiomyopathy. Ragdoll cats may also suffer from obesity.

Why can’t Ragdoll cats go outside?

Ragdoll cats are not bred to be outdoor cats, and should be kept indoors and kept comfortable inside your home. They have a very cuddly and dependent personality, so their temperament is not well suited to being an outdoor cat. Also, they have very long, fluffy fur that can become matted and tangled if they spend time outside. This makes maintenance of your ragdoll cat more difficult. Finally, the lifespan of outdoor cats is not as long as indoor cats, due to wild animals, roads, cars, and other variables that can cause an accident or a tragedy.

How smart is a Ragdoll cat?

The ragdoll cat is known to be a very intelligent breed. In fact, they can even learn some basic tricks that you might expect of a dog, rather than a cat! Ragdoll cats can learn tricks such as fetch or rollover, as long as you are patient with them and reward them well. This breed of cat is not only highly intelligent but has a calm and affectionate personality. It is all of these characteristics, including the tricks, that make some people say that ragdolls are similar to dogs—or that they are a great choice of cat for someone who is more of a dog person.

What is the age expectancy of Ragdoll Cats

Ragdoll cats generally speaking live longer than your average indoor domestic cat. Typically cats live in the 12-15 years range according to the ASPCA and most recognized cat organizations. The ragdoll however generally speaking lives 15+ years and 20 isn’t unheard of. I own a cat that is 23 going on 24 in March. Appropriately her name is Grandma Cat.

Grandma cat is in great health, doesn’t always make it to the litter box, and does have a tendency to matt more than my other ragdoll. She is also VERY VERY vocal. Ha. She talks a lot, and when it’s the middle of the night and she doesn’t have what she wants she will definitely let you know.

She is quite the character. She also, like most ragdolls, likes to be close to people. Wherever Jenn and I sit she will make her way to that spot. She doesn’t like to touch but she will literally get as close as she can without touching.

There are a number of different factors that can influence the lifespan of a cat, and its the same for ragdolls. Here are a couple of bigger issues. The lifespan of a ragdoll cat can be affected greatly by diet, nutrition and regular vet checkups.

If you have rescued a cat or taken in a stray here are some things to look at.

How to tell how old your cat is

How to calculate your cat’s age in human years.

It is commonly understood that one cat year is equal to 7 human years, but that is not entirely the truth.

Cats age much quicker in the beginning, and environmental factors influence the age of a cat in human years. The first two years are the quickest and then it’s 4 years per year after that.