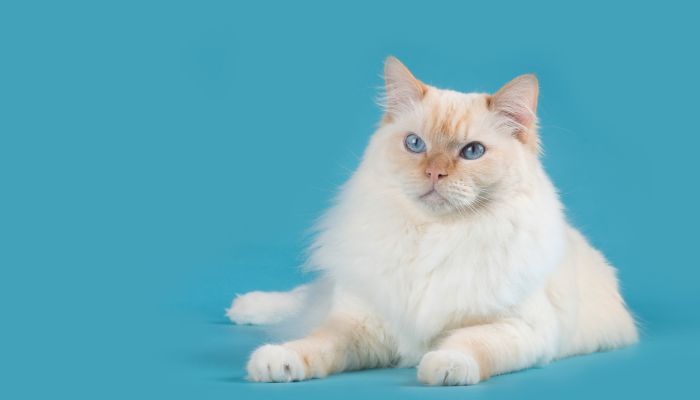 The body of the flame point ragdoll is almost always a creamy shade of white, with flame tones on the cat’s head, legs, and tail. The name “flame point” actually comes from the points of the cat that are coloured red or orange, just like a candle flame. When it comes to the paw pads of these cats, they are typically light pink.

Believe it or not, flame point ragdoll cats can actually change their colour. This usually depends on their body temperature, and it has a lot to do with their genetic code. The ragdoll cat breed has a special mutation that affects enzymes which play a key role in the pigment production for their coats of fur.

The flame lynx point ragdoll cat is different than the normal flame point ragdoll mostly in the body shading. The colours on the flame lynx point cat appear typically as deep red bars and are separated by a lighter tone of white. The ears of this cat are usually a very deep red colour with eyes that are bright blue and paw pads that are coral pink.

Mitted ragdolls are one of the most colourful types. This adorable cat usually comes with a light white body and a soft orange face. These cats also have orange legs with white mittens. They are pretty much identical to bicolor ragdolls except for their pure white mittens.

The flame bicolor torbie ragdoll is a rare mixture between a traditional seal point ragdoll and a flame point ragdoll. They have all the characteristics of each but are born with the unique torbie pattern that makes them very sought-after cats.

Ragdoll cats come in six different colour patterns. Two of them are extremely rare, and the others are only moderately rare. You have flame point, seal point, blue point, cream point, chocolate point, and lilac point.

The rarest type of ragdoll is the lilac point. This is when the cat has pink-beige colours rather than blue or red or orange. The second rarest type is the chocolate ragdoll cat, which as you can probably guess is coloured with light brown, chocolate points. Both these types of cats are extremely elegant and beautiful, and you probably won’t see very many of them.

As for the most popular type of ragdoll cat, it’s going to be the blue point. These cats are extremely popular all across North America for their blue colour tones and striking characteristics. These cats are truly magnificent, and they look positively amazing in the sunlight with their blue points illuminated.

The red point, or flame point ragdoll, is one of the rarest ragdoll cats available. Blue ragdoll are the most common, and red ragdolls are extremely difficult to come across. They aren’t as rare as chocolate or lilac, but they are very unique felines that you might have a very hard time tracking down if you want to adopt one.

Red point rag dolls do not come in lipstick red. This may be disappointing to some people, but it’s just not a shade that comes with these cats. The name may make it seem like the cat will be lipstick red, but it’s usually more of a subtle red or dark orange. The absolute closest a ragdoll cat can come to being lipstick red is a very light red with orange undertones.

Can Ragdolls Be Orange?

Ragdoll cats can absolutely be orange. But it’s not the typical orange you might be thinking of. It’s not going to be a pumpkin orange, but more of a reddish orange. In most ragdoll cats, there will be more orange than red, and even the red colours will have hints of orange in them.

In fact, the reason these cats are often called flame point is that their colours resemble the orange-red tip of a flame. Not really red, not entirely orange – but somewhere in the middle.

Ragdoll cats are not born red. The truth is that every ragdoll cat except for mink ragdolls are born completely white. It takes some time for the cat to develop their tones. It might take at least a year for your cat to develop its red fur or orange fur. This usually happens in the first few months of life, but sometimes it takes a bit longer.

If you were hoping to spot a red point ragdoll in a litter of newly born kittens, it’s not going to happen. The only way you can recognize a red point ragdoll is later on in life when its fur has actually turned red. Their bodies will still be a clear, silky white, but the points will be somewhere between bright apricot and a deep, reddish orange.