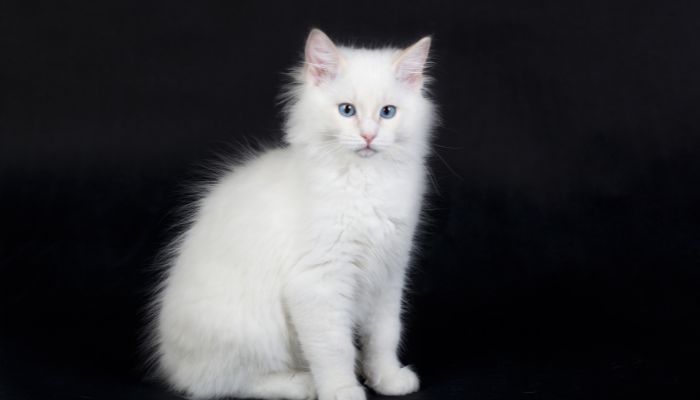 The ragdoll cat is a cat breed that has become very popular in recent years. They are gorgeous animals, and in addition to their looks, have pleasant personalities.

They are friendly, docile, and sweet, and are more cuddly than some other breeds of cat. Another thing about the ragdoll cat is that they are a breed that comes in very many colour variations.

One of the rarer colour variations of this breed is called cream point. Read on to learn more about the ragdoll cat breed, as well as about cream point ragdoll cats specifically.

What Is a Ragdoll Cat

The ragdoll cat is a very popular breed of cat. They are easily recognizable by their blue eyes and their soft, fluffy coat.

Typically, they come in different colour variations of white fur and another colour, which is usually concentrated in areas such as their paws, tip of the tail and ears, and a mask across their face and a saddle on their back.

This breed is known to be sweet, playful, and affectionate. They can even learn certain tricks with the right amount of patience, as they are also very intelligent. Many ragdolls learn to play fetch and roll over, for instance.

What Is a Cream Point Ragdoll

It is a ragdoll whose coat is clear or pure white, with the point colour appearing to be a pale buff cream or a light pinkish cream colour. The nose and paw pads of the cat are coral pink.

How Rare Is A Cream Point Ragdoll

The cream point ragdoll is one of the rare color variations of this breed. In fact, it is the rarest if them all!

Only 3% of ragdoll cats are cream point.

For comparison, the next rarest is the lilac point ragdoll, coming in at 4%, and then the chocolate point ragdoll, which comes in at 5% of ragdoll cats. For this reason, having a cream point cat can make you very popular! It can also be beneficial to you if you are someone who has show cats and competes in shows with your pets.

However, if you are on the hunt for a cream point ragdoll, the cat’s rarity can make it a challenge.

Since they are the rarest of the ragdoll cats, they are also the most expensive. You can expect to pay more than you would for one of the common ragdoll colours, like blue or seal. In addition, you will likely find yourself on a waitlist for a very long time with your breeder as you await your turn to get a cream point ragdoll cat.

If you have successfully found yourself a cream point ragdoll, you will also need to know how to care for it. There are a few things to watch out for so that you can keep your pet safe and healthy.

For example, ragdolls are prone to obesity, so you will want to be sure you are not overfeeding your cat, since obesity can lead to other health problems down the road. You should also avoid letting your ragdoll outside.

This can cause their long fur to get tangled and matted, making maintenance more difficult. Ragdoll cats need to be brushed regularly to keep their coat healthy and tangle-free.

Brush their coat at least twice a week.

Ragdoll cats come in many different colorations or colour variations. One of these is the cream point.

If you are totally set on getting a cream point ragdoll cat, you should expect to wait a long time and likely have to pay more money for your cat than other ragdolls of different colours.

You will likely be on a waiting list with a breeder for a while before you are able to get your cream point ragdoll.

What is the most beautiful Ragdoll colour?

The most beautiful colour of the ragdoll cat will depend upon your personal preference. Beauty is in the eye of the beholder, after all!

However, either the cream point or the chocolate point ragdoll cats are believed to be the most beautiful colour variations. They are in high demand and highly sought after for this reason!

What is the most sought-after Ragdoll cat?

Seal Point Ragdolls are generally considered the most popular, and most beautiful.

Even if one colour is more sought after than the others, it may be hard to get if it is rare, so it could not be counted as the most popular if we are basing this off of the number of cats of different colorations that are owned.

The colour of the ragdoll cat that is owned the most is blue or seal.

However, cream point, chocolate, flame, and lilac are some of the rarest colorations and therefore the most sought-after ragdoll cats.

What are the cons of having a Ragdoll cat?

There are pros and cons of having any pet, including a ragdoll cat. It is important to be aware of these before you get a ragdoll and make the commitment to your pet— a commitment you do not know if you are able to keep.

One con is that ragdoll cats do not make good outdoor cats, so if you are looking for a cat that you can let roam outside, a ragdoll is a poor choice of pet. Ragdolls are also very vocal, which can be a pro or a con, depending.

They can also easily become obese, so this is something to watch out for.