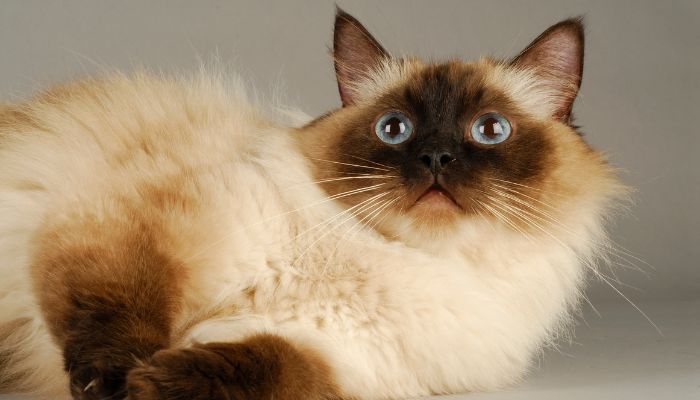 If you have never heard of the ragdoll cat, you may as well be living under a rock! This is a breed that has skyrocketed in popularity in recent years.

These cats are sweet and cuddly, and they are beautiful to look at, too! They come in many different colour variations, some much more unusual than others. One example of an unusual colour variation of this breed is the chocolate point. Not very many ragdoll cats come in chocolate point, but the ones who do are stunning.

Take a look below for more details on the ragdoll cat breed, as well as the rare chocolate point coat variation.

What Is a Ragdoll Cat

First things first, what is a ragdoll cat? This is a breed of cat that is known for a docile temperament and is very sweet and cuddly, too. A ragdoll is intelligent and will be able to learn some of the tricks that you might expect of a canine, such as roll over and fetch.

Ragdoll cats are easy to identify as well, due to their beautiful blue eyes and striking colorations.

Their coat is usually white, with another colour that is concentrated on their extremities and areas such as the paws, tip of the tail and ears, the face, and a saddle on their back.

What Is a Chocolate Point Ragdoll

The extremities of the cat, such as its ears and paws, are a warm chocolate-brown colour. Its paw pads and its nose will typically be a cinnamon-pink colour.

How Rare Is a Chocolate Point Ragdoll

As we mentioned above, the chocolate point ragdoll cat is one of the rarer colour options of the breed.

In fact, it is one of the rarest kinds of ragdoll cat that is out there!

Only 5% of ragdoll cats are chocolate point, making this the rarest colour option besides the cream point, which comes in at 3%, and lilac ragdolls, which come in at 4%.

Having a rare chocolate point ragdoll can be a big deal, especially if you are in the cat show circuit. Of course, it is also simply a beautiful colour and is sought after for this reason!

If you want a chocolate point ragdoll cat, its rarity can work against you. It makes it harder to find cats with this coloration, and they are usually more expensive than ragdolls of other colors, too.

You can expect to be on a waiting list for a while when you are waiting for a chocolate point ragdoll.

Now that you know more about the chocolate point ragdoll, you may be wondering how to care for the cat. It is the same as any other cat of the ragdoll breed. There are some things to be wary of so that you can keep your cat in tip-top shape.

For instance, ragdolls are prone to obesity, so it is important to keep them from overheating. Avoid overfeeding them or giving them too many treats. After all, obesity can lead to other health problems down the road.

Ragdolls are not outdoor cats and should be kept inside, too. This also helps to ensure that their coats do not get tangled and matted from exploring outside.

It is easy for their long coats to get tangled, so you must brush and groom your ragdoll at least twice a week to avoid this.

Is a chocolate point Ragdoll rare?

How much is a chocolate point Ragdoll?

As the ragdoll cat comes in many different colours with different levels of rarity, there are different costs associated with getting one of these cats, too. The rarer the colour variation, the more money you should expect to pay.

This is only for a pet-quality ragdoll. If you want a show quality chocolate point ragdoll, that is even more expensive. A show-quality ragdoll usually starts at around $2500.

What are the rarest Ragdoll colours?

Lilac cats come in at 4%, while chocolate is 5% and the flame is 7% of ragdoll cats. All of these colorations can be hard to find or to get ahold of, and you may end up on the waiting list at your breeder’s for a while if you do not want to settle for other colours instead!

What is the prettiest Ragdoll colour?

Of course, the prettiest colour variation of the ragdoll cat will depend upon personal preference. Everyone has different tastes, and beauty is in the eye of the beholder.

Some of the rarer colours of ragdoll are said to be the prettiest, and this is because they are less common, too!