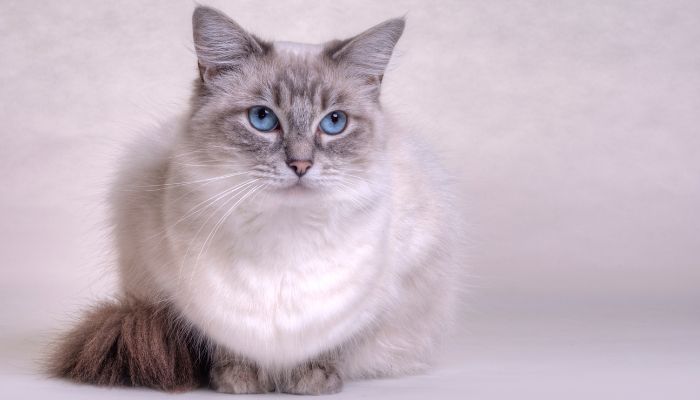 Are you looking for a blue ragdoll?

Blue ragdolls and the blue point ragdoll are actually more grey than blue but the bluish-grey colouring is well known and it is a well-liked trait. This colouring is a similar base colour to the seal colour but not nearly as dark. It also comes in the same fashion which is colder areas of the cat’s body get the colour and warmer areas stay white.

The blue ragdoll will generally have a white body, although they can get some colour, they will not be as dark on the body as the seal, and will likely remain more white. As with all ragdolls, however, this is a generalization and can change over time. Ragdolls don’t get to their full-colour pattern until at least 3-4 years of age. Even later in life, they can change colours again, not drastically, but they can. Typically they go darker or lighter in the body.

The Blue colouration is a very popular colour when it comes to Ragdoll Kittens and Ragdoll Cats.

Ragdoll Cats have two main distinctions when it comes to colouring. First, there is the colour itself like a seal, blue, red (flame) or lilac. The second distinction is the pattern which is where the point, mitted or bicolour words come into play.

On top of that there is also other variations like the lynx and the tortoiseshell (tortie). Each of these variations is on top of the base colour and the base pattern.

Lets look at each on of theses as it pertains to the blue ragdoll colouring.

A blue point ragdoll or blue colourpoint ragdoll will have a very distinct pattern. They will have their blue colour at the extremities, so the ears, the nose, the tail and the paws. Their body will be bluish-white and have a cool tone to it. Typically the cat will get whiter as you travel back towards the stomach and the chest, however just like the seal point there is a wide degree of variation when it comes to body colouring, and it will change with age.

The colour points will be darker blue and the eyes will also be a deep blue. It is also important to note that the paw pads and the nose itself will be a slate colour.

The lynx variation is a description of a tabby look on the face of the cat. Typically it means that there will be dark and light lines on the face to give it a lynx-like look. This variation can be seen in all of the other colours and patterns.

A blue lynx point ragdoll will have the blue colour matched with the point pattern as described above and then it will also have some pencil-type lines/markings on its face. The eyes will be blue and the points will be blue. Similar to the pointed ragdoll the lynx will have colder tones on its body, and be white on the chest and back, again depending on how its body colouring develops. You may also see some pencilling on the body.

Due to the tabby colouration, the nose should be a pink colour although slate is ok. The foot pads should be slate.

The other variation to the blue point will be the tortie. This is essentially the same as above but what you will typically see is that the nose colouring is split in half. One half is the darker grey or slate colour including the actual nose pad, and the other half is lighter, or white and the nose pad is pink.

The cream coloration is really white, and mostly white all over. The body is still bluish and platinum grey in colour and colder. The points are still grey but now they will be mixed with a cream colour, mottled a little like the tortie. Eyes are blue and the leather on the pads is a cinnamon colour, or a flesh colour or a coral pink with some mottling.

Ok so now we are going to put this whole thing together in a complete mix. The blue-cream lynx point will have all of the characteristics of each designation. So it will have the blue and cream colourations, it will have the lynx attribute which is the tabby/lynx look and it will also have points which means all of the extremities are blue.

you are also looking for deeper blue-grey bars, and they are pretty obvious, and they will be separated by lighter colours. Then you will see a variable mottling of cream colours in the mix, and at the points. The nose colour can be slate again or the preferred pink edged in slate, and the paw pads are the same.

The mottling of colour on the points the pads the nose and the face are what really set this coloration apart.

The bi-colour ragdoll is a mix of two main colours and it is known for two main things. Number one it has a “saddle” on its back with a darker colour from the ragdoll colour family and number two it has a white inverted “V” on its face. This inverted V needs to remain within the eyes as a boundary. The points are on the ears, the mask and the tail.

The nose is pink and the chin, the chest and the underside are white. The legs and the feet are all white.

For a blue lynx bicolour, you are going to get the blue colours in the points and on the body. There will be the lynx markings like pencil lines on the mask and face. However, there should still be the bicolour markings which include a different coloured saddle and a white V on the face.

Ok, so now that we have dealt primarily with the pointed colours we will move on to the mitted colours. These markings are really about two main things, number one mitted ragdolls have dark legs and white mitts and they have a white chin.

The blue-mitted ragdoll will have blue points including the ears, legs, mask and tail. These will be well-defined. It may have a white blaze on the face, but it will definitely have a white chin that extends to the chest. The front feet must both be white and only extend to the wrist. The back paws will also be white, but the white will extend up to the hock. The nose will be the same as the colour point.

The body colour will be both white and blue like the blue point, but there will be a white stripe on the chest and belly area. The full colour will not be achieved until after they are 2.

If there is no white chin but white paws you may have a Birman, but you don’t have a blue mitted, mitted cats must have a white chin.

Not really, no blue ragdoll cats are not actually blue. The blue terminology comes from the cold tones that the grey/slate colouration has. It is a technical term that is used by breeders and cat fanciers associations to determine official colours for the breed.

What does Mitted Ragdoll Mean?

A mitted Ragdoll is determined by two main distinctions the colour of its paws and the white stripe on its chin that extends to its stomach. A mitted Ragdoll is a characterization and can be mixed with any of the other colour patterns. So you can have a mitted ragdoll that is a seal, or lilac or blue or chocolate as its base but then has the mitted characterization or pattern on top of that.

Will Blue Ragdoll Cats Change Colour over the Course of their Lives?

It is very likely that they will. As their body temperature changes their colour will also change. This will be especially true in the first few years of their life. Then as they mature their body colour will typically shift a bit, especially on their backs.

As they get a little older their colour points have known to whiten a little bit. The blue colour will not change much but the spots and lines will shift and move. It is a really good idea to take yearly pictures so you can look back and see.